We marked the arrival of our fifth academic year since foundation with the visit of British Consul-General, Brian Davidson CMG, earlier this month. Marking a first school visit since his arrival into the region, he was accompanied on a full school tour and a meeting with a group of student representatives by Shrewsbury Principal, Ben Keeling. Mr Davidson spoke warmly about the nature of his role and listened intently to students keen to share news of their latest initiatives, which include the delivery of a school-wide dining survey. 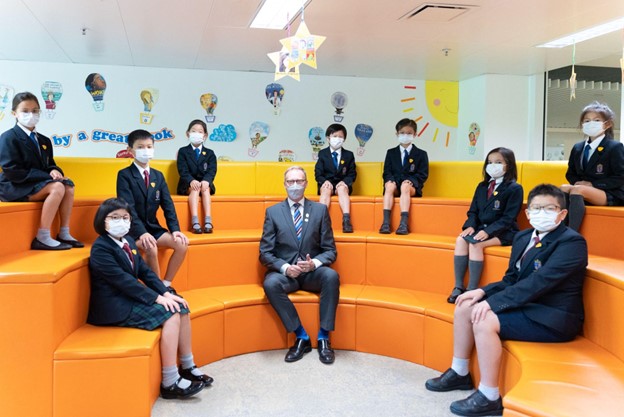 "It was an honour to mark this special milestone with the Shrewsbury team and wonderful to see this icon of British education flourishing here in Hong Kong."
Brian Davidson CMG, British Consul General

Mr Davidson and Mr Keeling were joined by Chair of the Board of Govenors, Bernard Chan, and School Supervisor, Stephen Wong, for a ceremonial ribbon cutting and the uncovering of a plaque positioned proudly upon a commemorative bench. 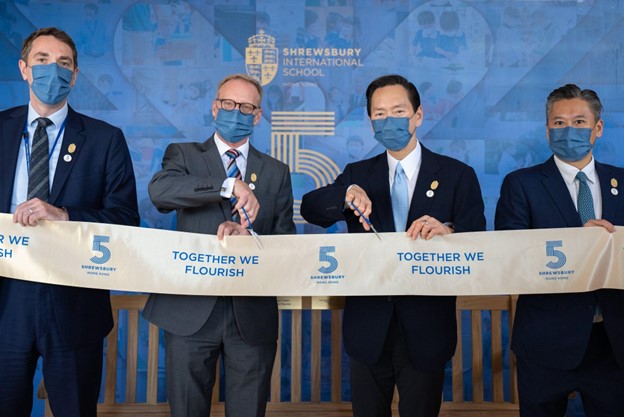 "We were proud to be able to welcome Mr Davidson to Shrewsbury and greatly appreciate his support as an ambassador for business in the region and a strong advocate for the benefits of a British education."
Bernard Chan, Chair of the Board of Governors at Shrewsbury

“With memories of a sun baked groundbreaking ceremony in the latter half of 2016 deceptively clear in my mind, it is difficult to envisage the passing of such a substantial period and yet here we are: five years, thousands of interconnected relationships, countless treasured memories. To all who have supported our journey, thank you.”
Ben Keeling, Shrewsbury Principal

A new school no longer, Shrewsbury International School Hong Kong is the sole provider of premium level primary education in the region.